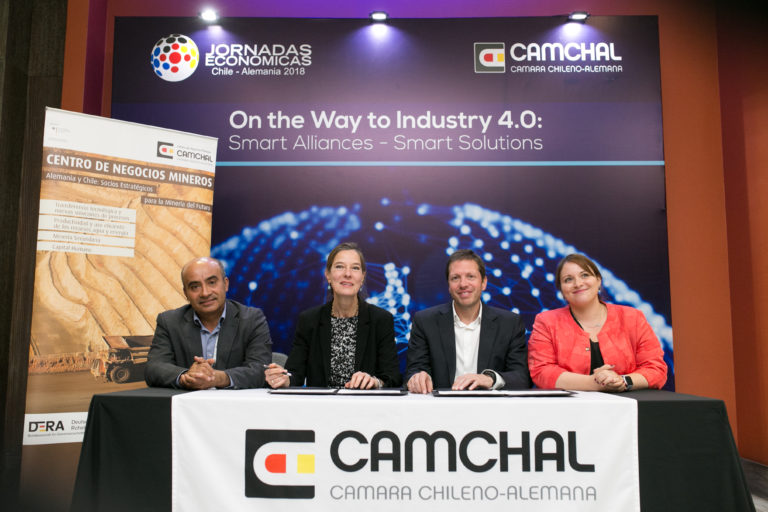 The agreement is aimed at promoting innovation, tech transfers and the installation and development of capabilities between suppliers from both nations.

Within the framework of Chile-German Economic Meetings for 2018 held last October 25 within the Open Innovation Program on Mining, Expande and CAMCHAL (the Chilean-German Chamber of Commerce and Industry) signed a collaboration agreement aimed at exploring new opportunities, specifically in the field of mining.

With this alliance, a point of contact and meeting was sought that would facilitate commercial exchange, tech transfer and the installation and development of capabilities among suppliers from both nations.

Within this context, CAMCHAL will be able to set up a network of contacts with German industry, as well as its tech nodes in order to support the development of new technologies. Expande, meanwhile, will provide its tech capacities in identifying problems among the mining companies taking part in the program and seek local counterparties for implementing and/or transferring the technologies.

For Enrique Molina, Executive Director of Expande, “the association between Chilean and German companies is fundamental in our journey as a country toward a 4.0 industry, more so when it means greater challenges regarding technological matters. Within this context, Germany is a strategic partner of Chile and especially mining, as it is a world class leader in technological innovation and development”.

On the other hand, Cornelia Sonnenberg, General Manager of CAMCHAL declared that “this cooperation agreement points to parties in both countries becoming strategic partners, with a special focus on such issues as innovation”. What is more, the executive added that she hopes to see the first results during the second meeting of the Chile-German Forum on Mining.