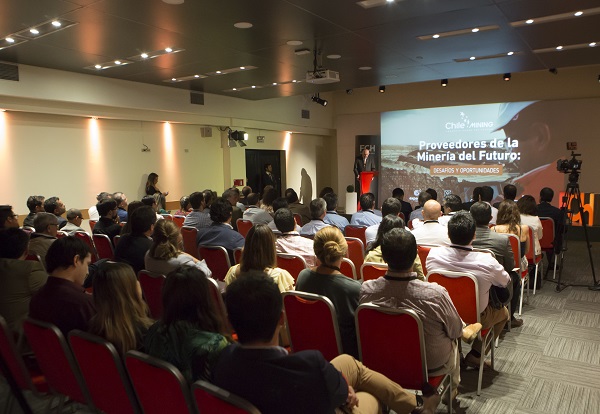 “Suppliers for the mining industry of the future: challenges and opportunities”, organized by ProChile, High Grade Corporation and Expande, who sought to provide information and tools aimed at fostering a collaborative work between mining companies and suppliers.

To provide a more collaborative environment and incorporate local suppliers into the dynamics of open innovation was the aim of the cycle of get-togethers: “Suppliers of the mining industry of the future: challenges and opportunities”, organized by High Grade Corporation, ProChile and the Open Innovation Program on Mining, Expande in the regions of Iquique, Antofagasta, Copiapó, Valparaíso, Concepción which ended this Tuesday in Santiago.

The activity enjoyed the participation of the Minister for Mining, Baldo Prokurica, the assistant director of ProChile, Marcela Aravena, the chairman of the High Grade Corporation, Mauro Valdés and the general manager of Fundación Chile, Marcos Kulka, among other authorities.

The meetings that attracted more than 300 local suppliers tackled the challenges and opportunities faced by the sector aimed at providing information and tools that would foster a better collaborative work with mining companies.

During the get-together in Santiago, Baldo Prokurica claimed that “Chile has become one of the countries with greater productivity and presence in the production of copper in the world and as we do mining on a world scale, we also have world-scale suppliers. That has evolved so thanks to the efforts of Fundación Chile, Corfo, ProChile and High Grade as well as other institutions have invested so that the different suppliers can expand in such areas as safety, capacity and quality”.

The authority also added that “20% of mining services in Peru are Chilean companies”. He also declared that work continued with a program that will enable local suppliers to enter the Mexican market and this is something that will create very important conditions for world mining.

Mauro Valdés, executive chairman of the High Grade Corporation sustained that “the focus of this cycle of get-togethers held in several different cities in the country, revolves around a discussion and the dissemination of our new road map for mining, to which can be added new nuclei, whilst others are upgraded. In this manner, whilst incorporating suppliers into the dynamics of open and collaborative innovation with mining companies, we are consolidating a live document; far richer and more valuable as regards its content and the real needs of the industry”.

He likewise mentioned that “the large attendance we have had at each one of these encounters demonstrates the interest and commitment of everybody who is a part of this industry and as a contribution toward the development of virtuous, sustainable and inclusive mining”.

On the other hand, the National Assistant Director of ProChile, Marcela Aravena, pointed out that “our aim with these types of initiatives is that of supporting these companies in their processes of internalization, providing them information and market opportunities in their main destinations. We are dealing with a sector that has abundant experience and development in the local market and with an enormous potential overseas and which also distinguishes our country as a provider of highly technological and innovatory solutions for the different mining processes”.

Meanwhile, Marcos Kulka, the general manager of Fundación Chile, stressed that “these types of get-togethers are an example of a systematic and systemic effort that involves a large amount of players (universities, companies, technological hubs and associations), following a road map that provides us with an orientation. From Chile we are indeed able to be a landmark in mining, creating an industry based on knowhow and worth more than US$ 4,000 million”. Likewise, he added that “this is in addition to the efforts put in by Expande and which so far have enabled 950 solutions to be mapped, coming from more than 500 suppliers, besides the more than 50 open innovation processes aimed at connecting the challenges of the companies as partners”.